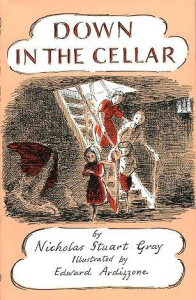 I’ve been exploring the works of Nicholas Stuart Gray, an English author who specialized in creepy British folklore and retellings of folk-tales. For example, he wrote Down in the Cellar, which features nasty imps called the Spoilers who come out of the ground carrying green lanterns at night, attracted by humans in trouble; and The Stone Cage,  the story of Rapunzel told from the point of view of the witch’s cat. 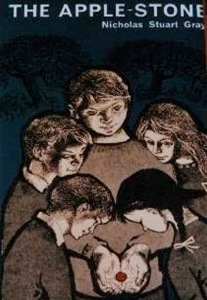 But today we’ll be considering The Apple-Stone, in which he departed from his usual type and tried his hand at a Nesbit-style magic adventure book.

Five children, three siblings and their two cousins, decide to try one of every type of apple in the apple orchard, and in the process discover the Apple-Stone, a being that digs itself into the earth and grows inside an apple, until it is discovered and used by humans. Its magic is to make anything you touch it against come alive (though the rules for this are inconsistent — it doesn’t make the pouch it’s carried in come alive). The personality of the Apple-Stone is straight from the Nesbit tradition of Cranky Magical Creatures, which long for peace and quiet and chide the children for their foolishness.

Among the things they bring to life are a toy rocket-ship, a stone carving of a medieval crusader, and a feather boa that turns into the Aztec feathered serpent god Quetzalcoatl. Some chapters are deeply creepy, as when they animate a guy they were building for Guy Fawkes day, who turns out to be quite mad and dangerous and ends up burning himself up on a bonfire. In the final chapter Gray gives his creepy folklore asethetic full rein. The children animate a gargoyle from the church tower, which turns into a nasty wizened child that delights in human misfortune. One of the cousins, who has been rather wild and a bit sociopathic throughout the book, is nearly caught by the lure of endless heartless destructiveness, but the others bring him back to his ordinary self.

Gray’s writing is excellent; this is definitely a literary book. But it is also cold. Gray had a miserable, abusive childhood, and it shows in the sarcastic one-upsmanship of the children’s banter, and the unnervingly realistic emotional abuse tactics of the evil creatures in his books.