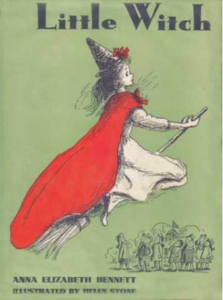 Madame Snickasnee is your classic nasty witch who like all things bad, like not washing, eating disgusting things, and turning the local children into flowerpots. She has a daughter, Minikin, who wishes she were not a witch, and could go to school and have friends.

Every night when Madame Snickasnee leaves to go do witch things, Minikin experiments with the colored powders on the shelf to see if she can make a fairy appear. So far she has not had much success, though she does produce a water nixie, a jester, and a centaur.

The story begins when Minikin braves her mother’s displeasure and goes to school (during the day, when witches should be asleep). She makes friends with Frances, a girl from a large family headed by a kindly grandmother who loves to paint but never has enough time. They become a sort of substitute family for Minikin, supporting her in her troubles though there is not much they can do for her. And soon Minikin’s troubles are multiplying, what with her suspicious mother, the school principal, the head of the PTA, and a hard-boiled detective investigating the missing children.

In the end Minikin’s real mother is released from a spell, and Madame Snickasnee is turned into an armadillo. (And all the stern adults who have been giving Minikin trouble would really like to try a ride on her broom.)

I first read this silly, lightweight book as a child in its Scholastic edition, with its scribbly 1960’s drawings by Lisl Weil, which shaped my impression of the story. It was not until I read an edition with the original illustrations by Helen Stone that I understood the original tone of the book, which is much more sweet and classic, harking back to books from earlier in the century. Details like the centaur had completely slipped my memory, because they didn’t fit with the overall vibe I had absorbed.  Scholastic had pretty successfully re-packaged it as the kind of winking, knowing book about witches that we see from the 1960’s on, like The Wednesday Witch (who rides on a vaccuum cleaner) and The Worst Witch (who attends witch school). 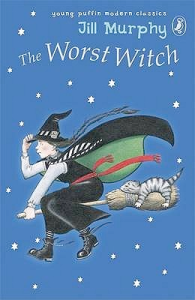 The image that stays with me most, though, from both editions, is the colored powders. What would all the other colored powders, and combinations of them, have done? I would really like a few hours alone in Madame Snickasnee’s kitchen.