Animals wearing clothes and buying things in shops, generally conducting their affairs like humans, sometimes actually alongside humans without the humans thinking there’s anything strange about it . . . this sort of thing found its way into children’s novels by a strange and circuitous route.

Before there was the English Wind in the Willows and the American Old Mother West Wind, there were Beatrix Potter’s short fables. I always thought of Potter as a mid-to-late Victorian, making her citizen-scientist contributions to mycology and her naturalist’s drawings of wildlife. But her first book, The Tale of Peter Rabbit, wasn’t published until 1902.

(As a side-note, Potter’s modern reputation for sweet cosy stories is bizarrely out of touch with reality. Squirrel Nutkin loses his tail, the Two Bad Mice smash up the doll house, rats try to eat Tom Kitten, and Ginger and Pickles is flat-out gothic.)

But back to my main point. Potter didn’t invent the genre. She was inspired by, of all things, the very American Uncle Remus books, which are stories from the African American oral tradition (recorded, sadly, by racist white dude Joel Chandler Harris). And these, of course, trace back to the animal fables of West Africa.

This kind of thing bounced back and forth across the Atlantic several more times, with a distinctive American or British stamp in each case.

L. Frank Baum got into the act in 1905, with a set of short booklets collectively called the Twinkle Tales, published under the pseudonym Laura Bancroft.

(Baum tried his hand at everything. He wrote boys’ adventure stories under the names Floyd Akers and Captain Hugh Fitzgerald, and more ladylike stories for girls under the names Edith Van Dyne and Suzanne Metcalf, as well as a veritable firehose of works under his own name.) 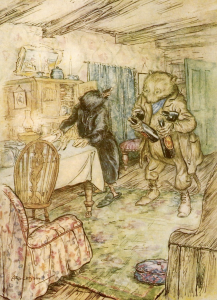 In 1908 England gave us Wind in the Willows, represented here by an image from the earliest illustrator, Paul Bransom, from 1913. (The original edition wasn’t illustrated, and the iconic pictures by Ernest Shepard didn’t appear until 1931.)

And in 1910 America shot back with Old Mother West Wind, the first of naturalist Thorton Burgess’s numerous books about Reddy Fox, Johnny Chuck, Peter Cottontail, and the rest.

My mother had this book as a child and I still have her copy, with that exact cover. (Picture swiped from internet, though.) The only thing I remember from reading it as a child is how Old Mother West Wind would bring out her children, the Little Breezes, in a sack, and set them loose to play all day in the meadow. In a way it’s a sweet idea, but . . . she keeps her children in a sack?

I also have my mother’s copy of In Fableland, which originally belonged to her mother. Published in 1911 by an educator who mostly wrote reading primers, it is not high in originality. The stories are retellings of Aesop’s fables, and to capitalize on the going trend the drawings feature animals dressed up like 1910’s working-class Americans.

Next week we’ll visit Anthropomorphized Animals as they changed after WWI. 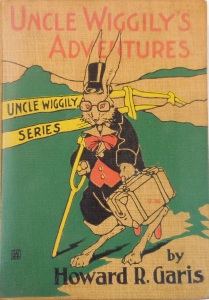 Addendum: I forgot to mention Uncle Wiggily, by American Howard R. Garis. The first book in the series appeared in 1912.

3 thoughts on “Anthropomorphized Animals, Part I”