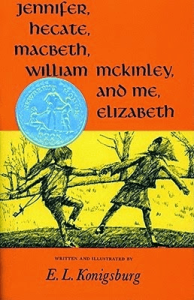 In 1967, newcomer E. L. Konigsburg published two of the best books of the 1960’s (and, astonishingly, both got Newbery awards/honors in the same year). The better-known of the two is From the Mixed Up Files of Mrs. Basil E. Frankweiler, but here we will consider the equally excellent, and completely different, Jennifer, Hecate, Macbeth, William McKinley, and Me, Elizabeth.

Jennifer, Hecate is the story of two girls who are uninterested in fitting in with the popular kids at school. Elizabeth is an awkward loner, and she is immediately intrigued by newcomer Jennifer, who seems grandly unbothered by the opinions of the other kids.

Jennifer is full of knowledge and ideas, and she claims to be a witch. She takes Elizabeth on has her apprentice, and leads her on a merry chase of rituals to be performed and trials to be endured (like eating raw onions for a week). Much of their time over the weeks and months is spent doing research and gathering ingredients to create a flying potion.

Up to this point, Elizabeth has been able to believe she sees signs of witchcraft, but on the crucial day of making the potion, they argue, and their friendship is apparently broken. One day a few weeks later, Elizabeth begins to put the pieces together: where Jennifer lives, how she had access to occult-looking items, how Jennifer had been hoodwinking her all along, even how she orchestrated the fight. Jennifer (who maybe is just a bit witchy?) chooses that moment to show up at Elizabeth’s door. Elizabeth lets her know the jig is up, and they become friends again.

It’s an amazingly good book, about which I’ll say more when I post about Books for Odd Children. It is ever so slightly marred, perhaps, by the length of time that Jennifer spends manipulating Elizabeth. What’s up with a kid who would do that? And can she really shift gears that completely? Never mind. It’s a great book.

This book was clearly a strong influence on Zilpha Keatley Snyder (to be discussed in a future post). The friendship between Martha and Ivy in Snyder’s The Changeling closely mirrors that of Elizabeth and Jennifer, down to the detail of Ivy finally admitting to Martha that she had been lying about magic all along. The two books contain nearly identical mean girls, who the adults are equally fooled by. Snyder’s book is deeper, richer, riper; but it wouldn’t have been the same without Jennifer, Hecate as a prototype. (There is also, arguably, some influence of Jennifer, Hecate on Snyder’s The Headless Cupid.)