As much in the tradition of Alice in Wonderland as animal fables, Australia’s first contribution to the genre is The Magic Pudding (1918). It concerns three bombastic characters who own a magic pudding, which mouths off and runs away if you don’t watch it and is never used up no matter how much you eat. As in many other animal-fable style stories, humans and animals mix together in society without any apparent differentiation.

Aimed at younger children, the plot consists of repeated ruses by some puddin’ thieves to run off with the pudding, always ending with the thieves being punched on the snout and the puddin’ owners sitting down to feast. There is lots of nonsense poetry, characters who appear out of nowhere and do ridiculous things, and lines like “This is not a puddin’ thief, this is an Uncle,” and “at this season puddin’-thieves generally go south-east, owing to the price of onions.” 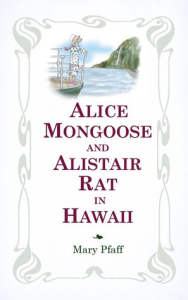 One year later came the publication of the first Alice Mongoose and Alistair Rat book, whose author is sometimes called Hawaii’s Beatrix Potter. (Hawaii at the time was still decades away from statehood, and was much more distant from the U.S., both culturally and in terms of travel time, than it is today. )

The book itself is merely a long picture book, but there are sequels that continue the tale, together forming a respectable-sized book. Alice Mongoose is born in India, but decides to go seek her fortune by answering a job advertisement in Hawaii. She is shocked to discover that her job is supposed to be killing rats, and instead she befriends her next-door neighbor, Alistair Rat. Together they have friendly adventures such as setting up a restaurant together, and celebrating Christmas.

While Magic Pudding and Alice Mongoose moved with the times and reached in new directions, the works of Alison Uttley were almost aggressively retro. Her first effort was The Squirrel, the Hare, and the Little Grey Rabbit (1929), followed by numerous other tales about Sam Pig, Tim Rabbit, Little Brown Mouse, and of course Little Grey Rabbit. The attempt to recreate the world of Beatrix Potter is clear.

Alison Uttley is better known today for her novel for older kids, A Traveller in Time (1939). This is an overly-literary, overly-historical time travel book, which I simply couldn’t bring myself to finish. She was a neighbor of Enid Blyton, whom she detested, considering her vulgar. She was right, Blyton was vulgar, but I’m not sure that Uttley’s self-consciously cultured and refined persona makes her any “better.”

Next up is Freddy Goes to Florida (1927), about a pig and his friends from the farm who decide to go south for the winter. By the third book Freddy has read Sherlock Holmes and decided to become a detective, and his detective adventures dominate the remainder of the series. (He is also clearly a precursor to Basil of Baker Street, to be discussed later).

Also clearly influenced by the animal-fable genre were the Babar books, written by a French author. Like many books whose world is a bit lacking in internal logic, these started as bedtime stories for a child (as did Wind in the Willows, incidentally).

The first book was published in 1931, but I’m using the cover of the second book because it’s a better illustration of the anthropomorphic lives of these elephants. In parts the world of the animals almost makes sense, as when the elephants battle with the rhinoceroses in the first book (though don’t get me started on the colonialist vibe); but when elephants interact with humans things get seriously weird. The author “puts a lampshade” on this with a joke in Barbar and Father Christmas:

Then Australia got into the act with Blinky Bill, a much sweeter and cuter set of stories than The Magic Pudding. The first book, Blinky Bill: The Quaint Little Australian (1933), is represented here by its color frontispiece, which shows Blinky as an infant being baptised (as koalas do).

That’s a wrap for our 1920’s and ’30’s books. We’ll talk about a few later descendents of the genre next week.