Modern readers may know Bedknob and Broomstick, a combined volume by English author Mary Norton (who also wrote the Borrowers books). Publishers continue to market this as a timeless classic, with the most recent cover by the amazing illustrator Marla Frazee (who illustrated the Clementine books as well as numerous picture books).

The originals of these books, though, were more quirky and interesting than the “timeless classic” label would suggest. 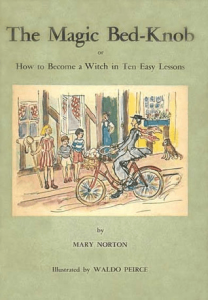 The first book, The Magic Bedknob, was very short, barely more than a long picture book,  published during WWII. (In fact, it was published first in the U.S., probably due to wartime shortages of paper and personnel in the U.K.) Mary Norton was unknown and unpublished at the time, and it was not a particularly original book in terms of plot. One gets the impression that it was pushed through into publication with scarce resources to keep wartime spirits up. (A similar oddity is The Magic Door, 1943,

which was written by a soldier on active duty, mailed back to England, badly illustrated by his wife, and published with seriously inadequate editing.) What The Magic Bedknob does have, though, is a sense of humor, and a distinctive grounding in a time and a place.

In terms of plot it is a standard magic story in the E. Nesbit tradition, with the twist that the magical personage the children meet, Miss Price, is modern and up-to-date in her witchcraft methods, having learned through a correspondence course. Miss Price enchants a bed-knob for the children, so that the bed will take them wherever they wish to go. They go on only two adventures in this first book, both lifted straight from Nesbit’s oeuvre: the first is a wish to see their mother (they have been sent away from London during the bombing), which results in a standard magic-creates-awkwardness-with-grownups adventure; the second is a trip to a South Pacific island with cannibals. (I’ll have a future post in which I get exercised about the trope of “cannibals” in children’s books.)

Bedknob was combined with its sequel, Bonfires and Broomsticks (1945) for a new American edition, Bedknob and Broomstick (1957), with very different illustrations by Eric Blegvad (who illustrated Diamond in the Window, The Gammage Cup, and the later Rescuers books). These illustrations continue to be used even as the cover art has changed.

The editing is slight, but often to the book’s loss. The bulk of the changes are to remove any reference to World War II, which has the effect of unmooring the story from its moment in history, as well as losing some of the best jokes. (Miss Price, explaining why she is giving up magic: “I was terribly tempted, and it brought me to my senses; I was tempted — how am I to tell you? . . . to DOUBLE MY BUTTER RATION.” This is quintessential Miss Price, who is trying to dabble in the dark arts but can never quite overcome her proper upbringing.) By trying to make this book “timeless,” the publishers succeeded in flattening it.

The remainder of the changes are a failed attempt to deal with the racism of the south sea island adventure. This mostly consisted of removing references to dark skin and curly hair — as if mentioning such things were in itself racist — while leaving intact all that is offensive and patronizing in the description of the island’s residents.

The sequel, Bonfires and Broomsticks, is a much better book, and will be the topic of next week’s post. 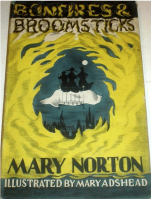