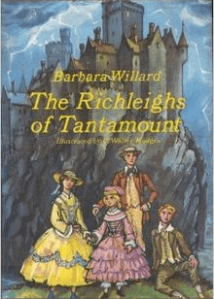 Four siblings from an E. Nesbit book find themselves in The Wolves of Willoughby Chase, wander through a few Enid Blyton Famous Five books and The Secret Garden, to arrive, surprisingly, at a satisfying ending.

Edwin, Angeline, Sebastian, and Maud Richleigh are the children of wealthy Londoners around the year 1870. They are fantastically pampered, but live terribly constrained lives, and are only saved from insipidness by possessing wit and personality, and having each other to share interesting ideas and games with. As in Wolves there are parents who go to sea for reasons of health, shifty servants who should never have been left in charge, and the loss of a beloved rocking horse with a classical name.

The children go to the neglected family estate of Tantamount, only to discover it has been left in ruins and used as a smugglers’ headquarters by the dishonest absentee steward. When the last of the few servants abandon them, they befriend two local fisherman’s children (also temporarily without parents) and live a life of romanticized poverty for the summer. The climax of the plot comes through no particular action on the children’s part: there is a rescue of one of their new friends via a rowboat on a stormy sea, after which they see Tantamount on fire in the distance. The disloyal steward has learned that his shenanigans have been discovered and the parents are on their way, so he burns the house to the ground to hide the evidence.

For most people who are not literary scholars it’s not clear why we should care about “theme” in a book, until we see what happens without one. This book can’t make up its mind: though the plot is clear enough, it’s never clear what the book is about. Is it about the children learning self-reliance? Or is it about the eldest, Edwin, growing into his role as heir apparent of the family? Or is it a straight-up adventure story? Or is it about class differences? Or is it about cleansing the family honor of evil and starting anew? It could happily be about all of these things at the same time; the problem is that it is first one thing, then another. It keeps getting bored and dropping threads to pick up new ones.

The ending, though, very nearly makes up for it. The children are swept back to London to a life of clean clothes and proper behavior, but they have been irrevocably changed. They plan to rebuild Tantamount some day when they are grown, but more importantly they carry inside them what happened to them that summer. They will continue to live the life prescribed by their parents while they have to, but the parents no longer dictate, or even really understand, who their children are. It is an unexpectedly profound insight into how it feels to be growing up.