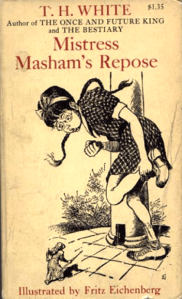 T.H. White is best known for his retelling of the King Arthur legend in The Once and Future King, a compilation of three novels including The Sword in the Stone.

Mistress Masham’s Repose concerns the orphaned heiress to a crumbling estate, being raised by a horrible governess with the collusion of her equally horrible sidekick the vicar. One day exploring a neglected and overgrown lake on the grounds, she discovers the Lilliputians, descendants of the ones from Gullivers Travels.

But White did not just borrow Swift’s creations, he wrote a book of biting satire in the vein of Swift. (I think people underestimate how much White did the same thing in Once and Future King. It is as much a satire on British society as it is a story about King Arthur.) The only problem is, satire is lost on children. Also like Once and Future King, there is some endless cataloguing of plants and wildlife; White was a bit of a naturalist, and he couldn’t resist.

Unlike many of the books on the “Literary Greats Try to Write for Children” list that make for bad children’s fare, this one makes a pretty good book for adults. I remember it on my parents’ bookshelves along with archie & mehitabel, Chas Addams’ Drawn and Quartered, The Annotated Alice, The Thirteen Clocks, The Rescuers, and other erudite but playful books of the early-to-mid 20th century. (Yes, The Rescuers was originally for an adult audience.) Mistress Masham’s Repose has, however, been re-released as part of the NYT children’s collection, so it is now firmly understood to be For Children.