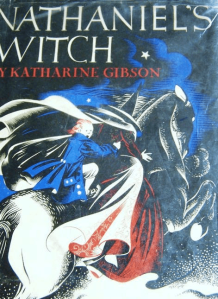 Nathaniel lives in small Massachussetts village in 1785. He does his lessons in the Horn book, longs to go to sea, and is being raised by a puritanical uncle. Period details abound, and the first chapter feels like we’re in Johnny Tremain or Carry On Mr. Bowdich. But after a long detour about Nathaniel wanting and getting a dog, we are dropped — a little too abruptly — into a supernatural tale.

With no warning Nathaniel is pulled off of a country path into a coven of witches who are awaiting the devil. (These are not modern cute-scary witches, they are the genuine, creepy New England witches of folklore. Nathaniel’s Witches is set just a few generations after the Salem Witch Trials.) Nathaniel befriends a witch who regrets her choice to sell her soul, and he stands by her when the devil taunts her, “You’ll be free when you’re Saint Nick!”

Now, this was a time in history when puritan-descended New Englanders didn’t celebrate Christmas: too much merry-making for their taste. So Nathaniel has a sudden inspiration. The witch should be Saint Nicholas, making the devil’s terms — which he didn’t intend literally — come true. (This was doubly clever of the author, since the devil is sometimes known as Old Nick.)

And there we have the delightful premise of the book. The two raid the local toy maker’s shop, buying everything with the witch’s single gold coin, and fly from house to house on the witch’s broom dropping gifts down the chimneys of the befuddled villagers. When they drop the last gift down the last chimney the witch becomes an ordinary young woman again, and the two of them are ridiculously stranded on someone’s roof (to the disapproval of the more humorless citizens). It’s not quite enough plot to sustain even this very short book, but it is a sparklingly good idea.